I had a sneaky trip to Booths at the weekend. I was hoping to find Patty Pan pumpkins but instead I found a variety of irresistible cauliflowers! 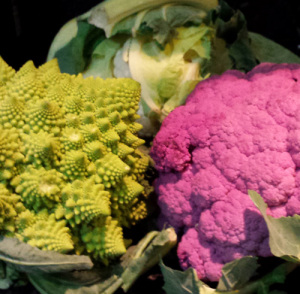 So what to make with my white, purple and Romanesco caulis? I decided to go back to basics and re-invent the classic cauliflower cheese.

I tried to follow my own “Eazy Cheeze Sauce” recipe, but I changed it slightly because I was short on a few ingredients and also I had some dairy-free yogurt to use up (homemade, doncha know!). I have to say I think I might have accidentally improved it!

Steam the cauliflower until beginning to turn tender. Do not overcook unless you want to eat mush! (Tip: use some of the greens, they’re lovely and not to be wasted) 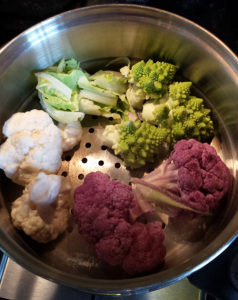 Arrange the cauliflower into a dish and pour the cheeze sauce into the gaps. Top with the grated non-dairy cheese and bake in the oven at 180oC for 20mins. 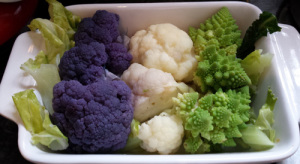 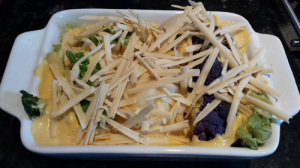 Peel and roughly chop the carrot and potato before boiling in a pan of water (you can add a little veg bouillon if you’re feeling fancy).

When soft, drain the carrot and potato and add to a blender along with the yogurt, nutritional yeast, mustard, oil, miso and garlic. Whiz together until smooth.

No need to pre-cook the sauce if using for the cauliflower cheeze recipe as it will cook in the oven. 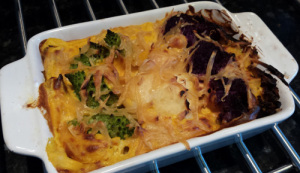 I was amazed at how super delish this recipe turned out!

Does it look vegan? Does it f*ck! It doesn’t taste vegan either ;o)