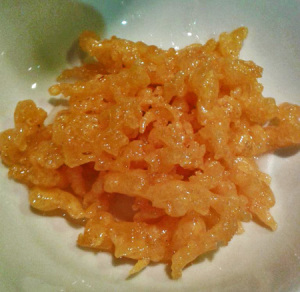 I got talking to an adorable chappy from New Delhi. He recommended that I try this recipe for jalebi: http://indianfood.about.com/od/specialoccassionrecipes/r/jalebi.htm

I’d never ever heard of jalebi before, but I’m always up for a new challenge!

The original recipe wasn’t quite vegan due to the use of yoghurt, so I just substituted with the plain soya alternative. I also think the quantities used in recipe might be a bit wrong… the ratio of yoghurt to flour wasn’t nearly high enough to create a pourable batter so I tweaked by adding some almond milk. Also, I don’t think that the recipe uses enough liquid to dissolve all the sugar in the syrup so I added more.  That said, my jalebi looks absolutely nothing like the picture so maybe I’m not as big a smart-arse as I like to think! 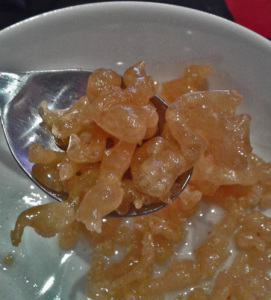 The finished product was still very yummy though…

I made enough batter to fill a 1Kg empty bottle of ketchup, but since I only used ¼ of the batter to create 4 servings, I have quartered the quantities for the below recipe:

½ x cup almond milk (or any other dairy alternative).

Mix all ingredients together and whisk into a smooth batter. Pour into an empty sauce bottle (a funnel makes this job a lot easier). Leave to “ferment”. The original recipe recommends 24 hours but I just plonked mine on the radiator for a couple of hours. Maybe this is why my jalebi didn’t turn out looking quite right! 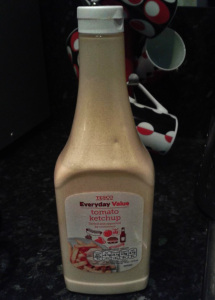 Do NOT shake the bottle too vigorously whilst sat next to your husband, it may end in a messy disaster! 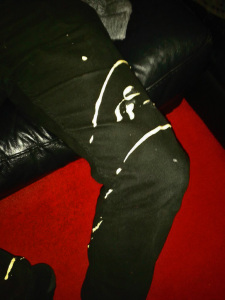 Put the sugar, water and rose water into a pan and heat whilst stirring. Once the sugar has dissolved, continue to heat and stir until the liquid is boiling and has reduced down to a syrupy consistency. The original recipe recommends sticking your finger in it to test when its ready, but I have experienced enough hot sugar burns in my lifetime to say that I really don’t recommend this!!!

Remove from the heat and stir in the cardamom and the saffron.

The original recipe says to heat up oil in a wok in order to cook the batter. I just used a deep fat fryer because it was handy.

Heat the oil and test if it is hot enough by adding a small amount of the batter. It should bubble and rise to the surface of the oil almost immediately.

Drizzle the rest of the batter into the oil using an erratic, wiggly pattern. When floating and golden brown, scoop out of the oil and place on some kitchen roll. Depending on the size of your fryer / wok, you may need to cook the batter in several batches. 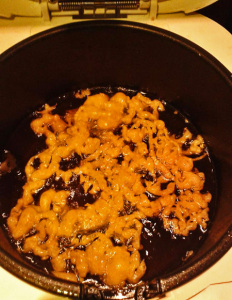 Add the cooked batter to the syrup, gently mix and leave for a couple of minutes so that some of the syrup is absorbed. Serve and enjoy! The portions may not look too big, but don’t be fooled – the jalebi is delicious but pretty sickly! 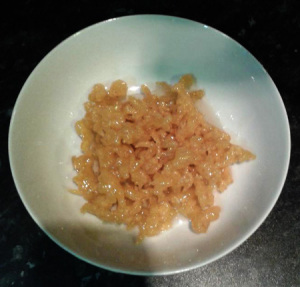 Even Harvey enjoyed a little nibble! Hope you do too J 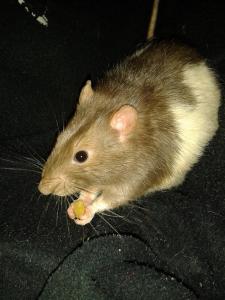