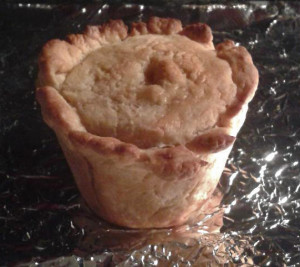 I’ve been dying to attempt this recipe for ages, the only thing that was holding me back was trying to get hold of vege friendly gelatine. As a kid, the gelatine in the pork pie was always my favourite part. If we were having guests round at Christmas, my mum would put on a buffet which included pork pies cut into quarters – I would go around when no one was looking, removing the meat, stealing the jelly, then replacing the meat into the pastry as if nothing had happened… bleurgh!

I couldn’t find any suitable gelatine in our local shops or supermarkets so I was forced to go online. I eventually bought “Vegeset” which did the job very well.

Unfortunately, despite my efforts, the “Jellying” of the pork pies was probably the least successful part of my creation. I used seitan instead of pig which unlike real meat, doesn’t shrink when cooked. Also, the pastry seemed to fluff up in the oven. These two unfactored factors meant that there wasn’t actually a whole lot of room for jelly in between the layers.

Next time I am going to press the pastry more thinly! And there will be a next time because these little pies are DELICIOUS!

Crispy on the outside, soft on the inside pastry, with a ridiculously “porky” centre, these bad boys are super sexy served up with a bit of vegan mayo, or maybe a nice chutney. 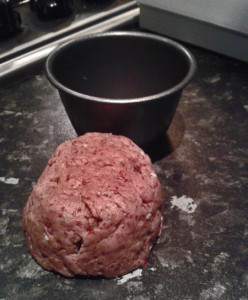 Once cooled, the seitan can either be kept in the fridge until ready to be used. You may need to trim the sides to make the seitan a good fit for your pies. I kept the off cuts so I could use them in a curry. Yum!

Although I altered the ingredients slightly, to make the recipe vegan, I basically followed this: http://gourmetdough.com/pastry/how-to-make-hot-water-crust-pastry

Apologises, this link is NOT to a vegetarian friendly post, but the method described is really good and nicely illustrated.. 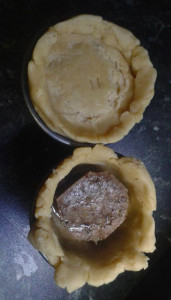 To assemble the pies: 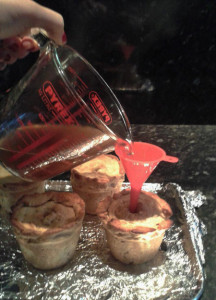 Pop into the fridge for half an hour to make sue the gelatine has set.

And finally, the money-shot!: 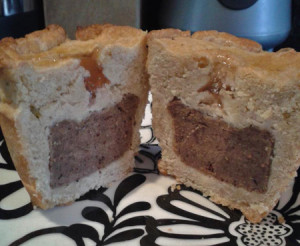 One thought on “♥ Vegan pork pie”