So last week I spent 3 days in Amsterdam on a work related trip.

Fortunately I randomly got upgraded to the Executive floor of the hotel I was staying in.

Unfortunately I have really bad vertigo at the moment and wasn’t really able to enjoy it L. No prostitutes or Lazy Js for me.

However, ill or not I was determined to try out some of the local vegan haunts. My hometown is so crap for anything vegan / veggie and so I wasn’t about to miss out because of a bit of dizziness! 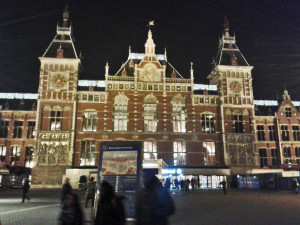 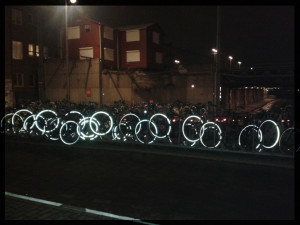 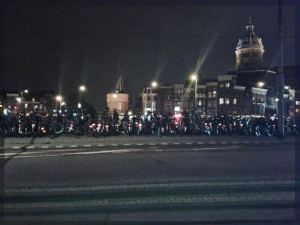 Sounds daft, but I was honestly amazed at just how many bikes there were!

One night I managed to pull myself together enough to go for a little walk to find a vegan cafe I had found on www.happycow.net

The café was called the Terranzen Centre ( http://www.terrazencentre.com) and had some mixed reviews if I’m honest. But a bit of research showed that the biggest problem people had was the slow service but everyone reported how great the food was. I don’t mind waiting for good food, so armed with my e-reader, off I trotted!

The café was fun to find, tucked up a narrow little side street – I almost walked past it. It was cold outside so it was a relief to walk into the cosy friendly atmosphere of the café. I was welcomed warmly by both the chef/owner and the waitress. The waitress was clocking off but she still took the time to wish me a nice meal and night. I ordered a hot chocolate soya milk and a crispy tempeh burger which the chef made whilst singing along to the same reggae track which seemed to be played on continuous loop the whole time I was there. I couldn’t help but smile inside! 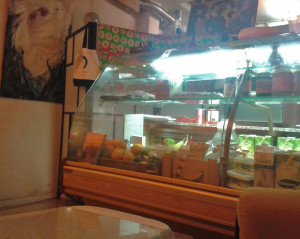 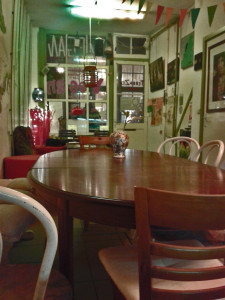 The hot chocolate was very nice and I enjoyed sipping it while reading my book. I had just finished it when my burger arrived. I’d never had tempeh before, but based on my experience I would definitely order it again. It was indeed crispy, and there were several slices placed on-top of a salad on-top of an extremely yummy brown sub roll. The salad consisted of lettuce, spring onion little sprouted things (like mung beans but smaller), sesame seeds, chunks of a soft fruit-like thing that I didn’t recognise and a really tasty sauce. Despite my ignorance towards some of the more “exotic” ingredients, everything worked really well. The burger was crunchy, yet saucy and fresh without ever being dry or drab in taste or texture. Had I been well, I may have asked exactly what I was eating, but what is life without the odd little mystery? 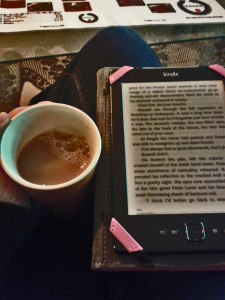 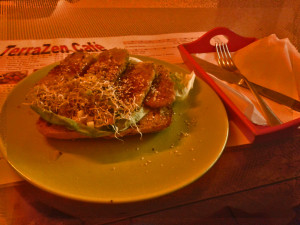 I guess the food did take a little while to arrive at the table, but I was having such a nice time reading and drinking my drink that I didn’t mind at all. However the chef still came over and apologised for the wait and explained that he likes to take his time making sure the food was perfect. Mission accomplished, my good man!

O.k., so when I was an omnivore, I loved nothing more than a big fat donner kebab with a ton of salad and dirty sauce on it, especially after a drunken night out. Now that I don’t eat meat, such a takeaway is obviously out of the question – but my goodness is this the next best thing!

Maoz is basically a falafel bar. I have had falafel in swanky Lebanese, Greek and Turkish restaurants, but I can safely say that this was the tastiest falafel I have ever had. 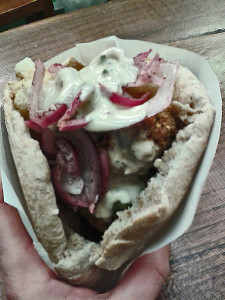 Like a donner, I still had the salad (which happened to be all you can eat), I still had the pitta and I still had lots of dirty sauce (chilli, coriander salsa and tahini sauce in fact!).
However, instead of strips of a greasy sheep/Alsatian/retired race-horse combo, I had 6 perfect crispy little balls of falafel ♥ bliss.

The salad was fantastic as well. Choices included cauliflower, couscous, tomato, cucumber, aubergine, onion etc etc. There was coleslaw and various mayonnaises too but I avoided these due to the dairy content. 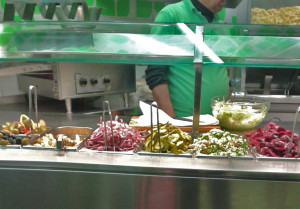 A quick search of the web reveals that there are plenty more vegan digs in Amsterdam… I think I need to find another excuse to visit!