I’ve been wanting to make vegan cheese from scratch for ages, but never got round to ordering some agar agar powder. 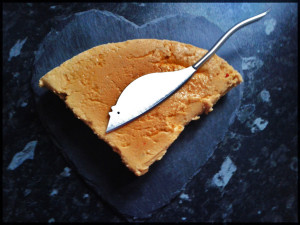 My recipe was inspired by a lot of current recipes which I found on the internet, but my biggest influence was this
one: http://www.vegangela.com/2011/10/15/homemade-vegan-cheese/

My cheese came out a little softer than expected (texture-wise think of a stiffer Vegusto No-moo melty –http://vegusto.co.uk/no-moo-cheese/6-no-moo-melty-7640144054052.html), but this was O.K. as it meant that I was able to spread it onto my toast or an oat-cake (perhaps more agar powder and less vegan cream / oil would produce a harder cheese?).

You will need a suitable mould to set the cheese in. My other half has a big glass bowl which is separated into quarters in order to put party nibbles in it. These compartments just so happened to be perfect for setting cheese in! A couple of ramekins would also work well. 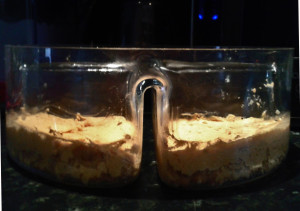 Whiz up the cashews in a food processor until you get a fine powder.

Add the soya milk to a pan, whisk in the agar and bring to a simmer. When the agar has dissolved, pour into the food processor (whilst whizzing) a tablespoon at a time. Don’t allow the agar-milk to cool or else it will set.

Add the oil, lemon juice, vinegar and cream and whiz until smooth.

Quickly pour into a greased mould, cover and refrigerate overnight. You will probably need to run a knife around the edges in order to remove the cheese from the mould. 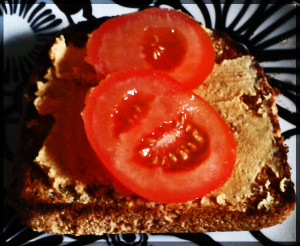 Perfect for cheese on toast, on crackers, or melted into soya milk to make a scrummy “cheese sauce”.