Today was the day of the NERS 1* Cup show in Preston. I can’t pretend I’m not rat-broody after all the gorgeous babies I got to play with today.

I was supposed to be taking my Harvey Wallbanger and Terry Triviani but sod’s law struck again, and Harvey started making a chesty-crackling sound pretty much as we were about to leave the house. Sigh! And of course, since coming home we haven’t heard another peep out of him…. Still, I think I shall be taking Bailey back to the vets next week (not convinced his antibiotics are having an effect) so I’ll get him looked over.

So, cut a long story short, I attended rat-less. I did however buy a lovely fabric shelf for the cage (courtesy of www.cosybedsandburrows.com). Here is a photo of Terry modelling how comfy it is!: 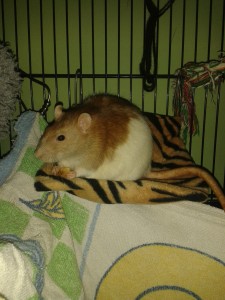 So after a hard day playing with rats, I still had enough energy to make a tasty vegan pizza for tea. I couldn’t be bothered with faux cheese so I just made it cheese-less but used extra tomato sauce to stop it drying out.

Whatever you fancy!
I used pineapple chunks, fresh tomato slices, red onion and a chopped up Vegusto mushroom burger (which tasted a bit like sausage meat once cooked on the pizza!).

I originally intended us having one pizza each, but  we were only able to scoff half each. Ah well, won’t need to cook tomorrow now 😉